Categories: In The News 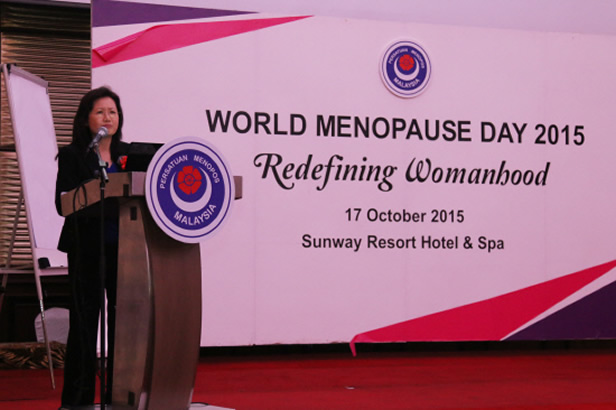 MENOPAUSE is merely a phase in a woman’s life, some 200 women learned at the World Menopause Day 2015 celebrations at Sunway Resort Hotel.

DIFFERENT PERSPECTIVE
An annual occasion held by Malaysia Menopause Society (MMS), this year’s event was given the theme “Redefining Womanhood” and presented attendees with a new perspective on menopause, as a time to celebrate instead of being sad at the end of a woman’s reproductive life.

The medical fraternity defines menopause as a time when a woman’s menstrual cycle stops for more than a year. Sadly, when a woman approaches her 50s, she has to bear the brunt of menopausal jokes of becoming temperamental, forgetful or easily irritable. The truth is that symptoms of menopause vary with every woman.

“Some women may breeze through this phase in life without any problems, while others may experience uncomfortable symptoms such as hot flushes, difficulty in sleeping, fatigue and mood changes,” explains MMS president Dr Ho Choon Moy (pix).

ANTIDOTES AND REMEDIES
Ho assured the attendees that menopausal symptoms can be easily treated with the right combination of medications and a healthy lifestyle. These include regular exercise, a balanced diet and a positive mindset. She also stated that not everyone requires medication.

Ho, a consultant gynaecologist, also educated the women on how they can enjoy the “second spring” of womanhood and recommended some of the latest treatments for menopause and genitourinary symptoms.

Common scares on Hormone Replacement Therapy were addressed by Ho who also urged women to come forth and seek medical advice for their menopausal symptoms instead of suffering in silence.

“The problem with menopause is that the ovaries stop producing estrogen, popularly known as the ‘female hormone’, which causes women to feel they have lost their femininity because they start losing their curvy shape, lack interest in sex, and even start growing more facial hair,” explained Wong.

Wong added that various treatments are available to help women feel feminine again and they need not feel alone or shy to share their concerns about the changes to their bodies.

The first 50 early birds were also treated to MMS’ inaugural “8 Gems Treasure Hunt”, where they had to hunt for eight exotic fruits hidden around the Sunway Resort Hotel premises. The lucky winners took home the exotic fruits, courtesy of Euro Atlantic. Meanwhile, the rest of the audience were given a moving and empowering session on self-actualisation by Anthony Dass and Tanalacksemy from Achievers’ Platform.

MMS was established in 1997 to raise awareness on menopause and its symptoms, conditions and provide a social support network for women, and their spouses, in their golden years. To know more, log on to www.menopause.org.my